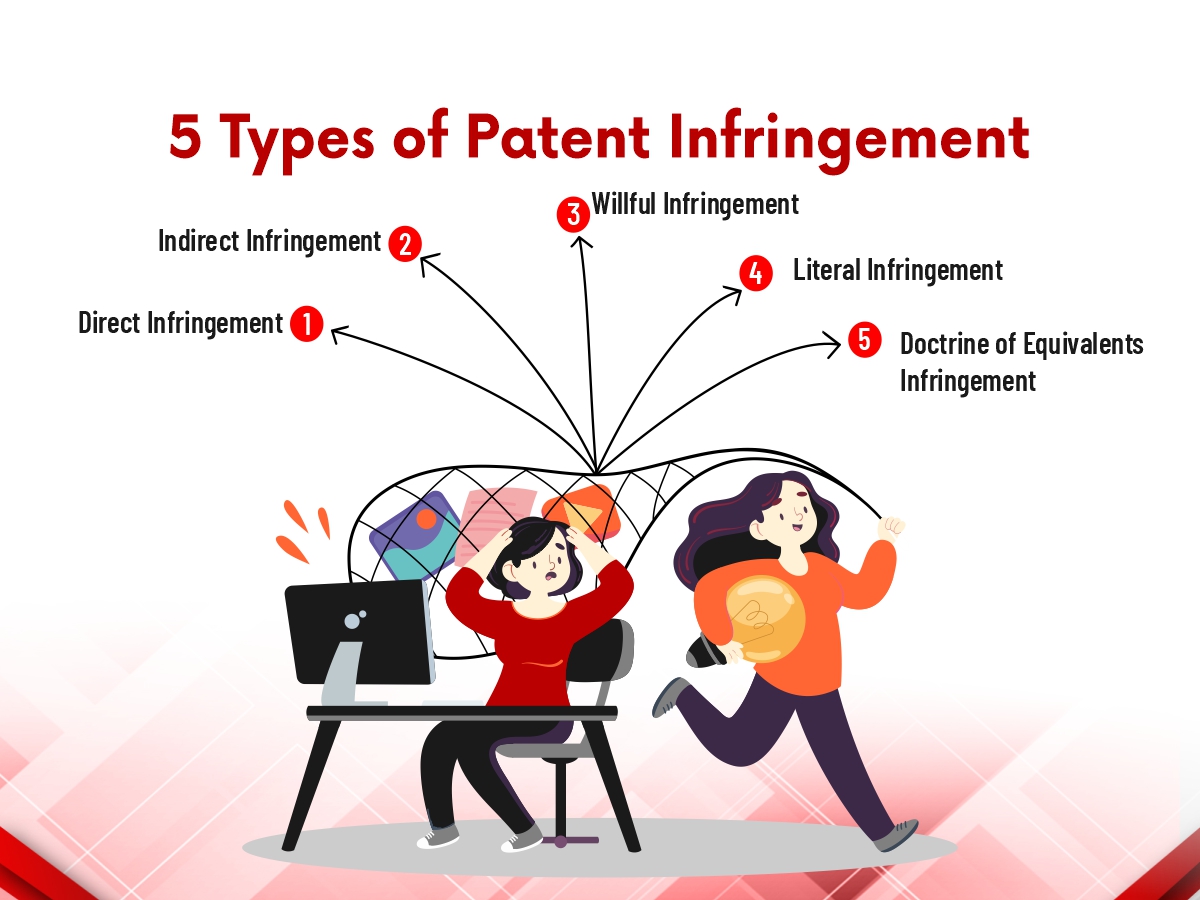 How is Patent Infringement Spotted?

Before knowing the types, let’s understand how a patent infringement is spotted. All product disclosures, videos, manuals, datasheets, etc. are examined to determine if the technology discovered after the earliest priority date of our patent invention exposes each feature of the granted claim.

A few exceptions do exist, such as the doctrine of equivalents, which allows for infringement even when not all claim elements are stated in the infringing product. By making only minor modifications to the claimed invention while maintaining the same functionality, the law of equivalents seeks to prevent an infringing party from exploiting the protected invention.

Equivalency is established when the infringing technology or product comprises components that are similar to or comparable to each claimed component of the invention covered by the issued patent. Reverse engineering, product deconstruction, and other specialized knowledge may occasionally be needed to verify a particular claim element of a granted claim.

If it is determined that the product literature and the patented invention overlap, a thorough claim chart is created, in which the product is mapped feature-by-feature in accordance with the claimed elements.

Different Types of Patent Infringement are given as follows:

This is the most common and clear instance of unlawful usage of a protected idea. Direct Infringement involves the production, sale, or commercial use without the patent owner’s consent. Direct infringement occurs when the unauthorized version either fulfils the original’s specifications or performs the same task as it did in the original.

In reality, there are two kinds of indirect infringement. One is Contributory Infringement, which is defined as the acquisition or importation of elements meant to be incorporated into a patented product. You would need to demonstrate that those materials were meant to be utilized just as part of your protected patent to defend your patent in this kind of situation.

Example of Contributory Infringement is “Selling parts that are only used to make patented goods”.

The other kind indirect infringement is Induced Infringement, which refers to any action taken by a third party that prompts someone to directly infringe on a patent. In other words, one person or group would have to persuade another person or group to engage in actions that would constitute an infringement of the original patent. One of those parties may still be held accountable even though they were unaware of the original patent.

Example of Induced Infringement is “Appointing a third party to manufacture a patented product without a license”.

This is considered disobedience to the patent law. It indicates that the offender was probably aware of the patent but decided against abiding by the law. In this type of infringement, the defendant found guilty gets charged with higher penalties, attorney fees, and court costs. The court can impose up to three times the actual damages incurred.

Literal infringement refers to instances where a patented product’s exact replica is being used, sold, or imported. Every feature listed in the original patent would be included in this replicated version.

It’s just as obvious as willful violation, despite being unusual. In some instances of literal infringement, the offending party may assert that they have the product’s license or that the original patent is in some way invalid.

Although it is uncommon for an infringer to produce and market a replica of the patented good. Even if these instances do happen, sometimes a foreign national is the infringer. A viable response to the infringement charges is typically present when cases alleging literal infringement reach the level of litigation.

It’s also crucial to remember that even if the infringing product does not exactly match the patented product, a judge may still rule in favor of the patent holder if the product achieves the same results and performs the same function. Even if the newer product is in some way more effective, the patent holder may still prevail in this scenario. To support that kind of decision, a court can point to the concepts of equivalents, entire coverage, compromise, estoppel, and superfluity.

No matter what type of infringement case you are involved in. The infringer may be subject to several penalties and may even be required to pay the patent holder compensation based on actual damages or a fair fee for unlawful use, whichever is greater.
A patent holder may forbid the infringer from continuing to create infringing goods or technologies in addition to suing for infringement damages.