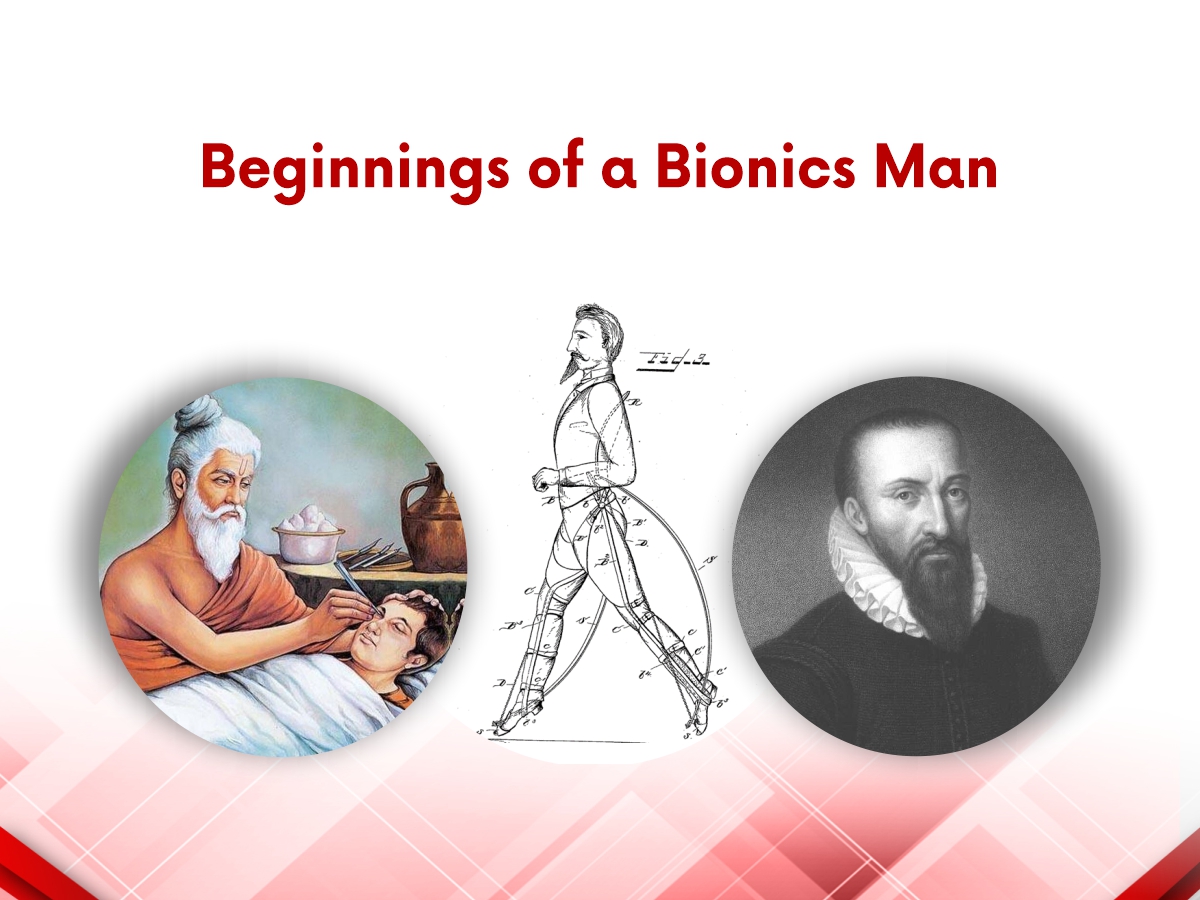 Beginnings of a Bionics Man

Disability affects about one-fifth of the world’s population. Physically disabled people are frequently stereotyped as having bad traits. Scientists are developing innovative technologies that has not predicted or expected. I feel this is the right moment to discuss prosthetic technology. The Bionics & Prosthetics is a relationship between biology and design. It demonstrates how electro mechanics connected to and implanted into the body are beginning to bridge the gap between disability and ability; between human limitation and human potential.

Bionic technology is being used in a variety of ways by scientists to improve the lives of patients. The exoskeleton, eyes, brain, hands, legs, ears, pancreas, and other organs are among them. The growing availability of bionic technology has the potential to change perceptions of people with physical disabilities.

To better comprehend the progress of Bionics, one must first look back at its past.

An artificial toe discovered on an Egyptian mummy is believe to be the world’s oldest prosthesis, according to archaeologists.

During the sixth century B.C., Sushruta, a surgeon and physician from India, was one of the first recognized surgeons (today known as father of Indian surgery) and was responsible for the progress of medicine in ancient India. He was well-known for his Rhinoplasty technique. The injured nose is replaced with an artificial nose in his Rhinoplasty technique. After obtaining enough information, English surgeon J.C. Carpue successfully conducted two identical surgeries in 1814. Sushrutha Samhita is a Sanskrit surgical book named after Sushruta.

During the subsequent centuries, more sophisticated prosthetics were constructed of iron and bronze. Ambroise Paré, a French Army physician, developed considerably more complex prosthetics, including the flexible leg, in the late sixteenth century. The biggest advances in the realm of prosthetics and engineering occurred during the seventeenth and nineteenth centuries.

In 1890s, a Russian inventor Nicholas Yang patented the first exoskeleton which was propelled by compressed gas bags and was designed to help with walking, jumping, and running.

The Hardiman suit was developed in the 1960s by General Electric and the United States Military, but it proved hazardous and uncontrolled. Models from the 2000s were bulky, but by 2005, battery technology had advanced, with lighter equipment and more computer processing capacity.

Bionic technologies such as prosthetic limbs and legs helped disabled persons to live a regular life. Researchers and inventors from all around the world are working hard to develop bionic technology that might one day make humans extra-ordinary. Here’s a list of bionics applications that might soon allow us to incorporate superhuman abilities!

Berkley Bionics and Lockheed Martin created the H.U.L.C exoskeleton, which features a titanium body, with military in mind. It is a third-generation exoskeleton that allows the wearer to lift up to 200 pounds with ease while also lowering the amount of metabolic energy required. The exoskeleton improves the wearer’s endurance by reducing the oxygen need.

Many developers and manufacturers are proposing a bionic lens with a virtual display that could be used for anything from enhancing eyesight to video gaming. Ocumetics Technology Corporation is a firm at the forefront of this technology. The firm has created bionic lenses that can be used to replace the natural lens in a human eye during cataract surgery. Clinical studies are already in the process and the company is awaiting regulatory approval to carry out the surgery.

DARPA has been attempting to incorporate ultrasonic brain stimulation technology into a helmet to aid soldiers on the battlefield. This helmet will be able to alleviate pain, tension, and anxiety, as well as increase alertness and boost cognitive capacities. Microcontrollers and ultrasonic transducers are installed in the helmets, which generate high-frequency sound waves that target specific areas of the brain. These sound waves are in charge of controlling the user’s thoughts.

A smart glove developed by Nuada, a Portuguese firm, will soon be available to the public, granting the wearer additional skills. Vitor Crespo and Filipe Quinaz collaborated on the gloves, which enhance the wearer’s coordination and backhand strength by enhancing the movement of the fingers and palm.

We are on the verge of entering an era in which machines linked to our bodies will make us stronger, quicker, and more efficient. These prosthetics are no different; these synthetic components can be touched and felt in the same way as biological parts. Humans will be able to perform tasks that they previously couldn’t.